Since August 2015, ethanol has traded at a premium to gasoline which is unusual by historical standards. This is likely to continue until oil prices rebound into the $45-50 per barrel range. Even with this situation, 2015 ethanol production managed to post a 3.8% growth for 2015. And in the midst of the seriously depressed oil market of 1Q 2016, ethanol volumes have produced year on year growth in the first two months of this year. The downside for producers is that production margins are near their lowest levels since 2012. 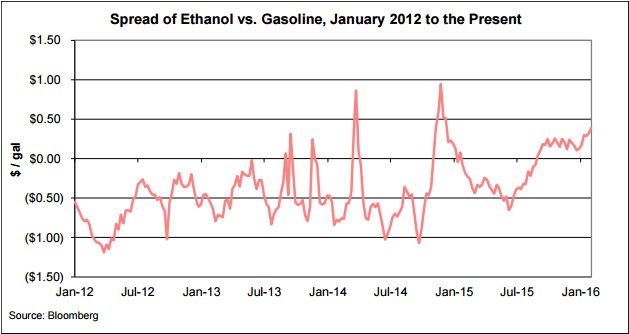 There is an incentive for blenders to use Renewable Identification Numbers (RINs) credits they may have accumulated because ethanol is more expensive than gasoline. It is more expensive to blend the extra ethanol into gasoline while the logical economic benefit is to use the RINs for any obligation that they’re not covering with their 10% blend. In addition, the issue of the blend wall has not yet been addressed.

So tight, or in some cases non-existent, crush margins are crippled by substantial debt and assets, most of which are in negative equity. Increasing stockpiles of oil, and Russia confirming this morning that no legal agreement has been reached on reduction in oil outputs. Iran is now looking to regain market share after the easing of sanctions. Oil prices look set to be spiking merely on short-term covering and could drop back to test the lows of $26.

The price of sugar has dropped back to 2009 prices which caused Brazil producers to increase ethanol production to 60% of their sugarcane (more details on Brazil below).

The growth in US ethanol production coincides with the run-up in the production capacity that began as early as 2000. There were fast growth rates in emerging markets and a debt-fueled boom time in developed countries that collapsed heading into the financial crisis before seeing a shake out.

Ethanol M&A, work on ironic inverse relationships. Transaction numbers spike after bad times and dip during good times. High margins work against deals. Low margins produce them. Simply put, when profitability goes up, ethanol M&A activity generally goes down. For example, after the 2008 downturn, 29 ethanol plants traded hands in 18 transactions before the end of 2010. Improved margins, starting in 2010, yielded only five ethanol plant acquisitions in four deals in 2011. Production margins sagged in 2012, spurring the sale of six ethanol plants late in the year and setting the stage for double-digit transactions in 2013 when 13 ethanol plants were acquired in 10 transactions of that year. The ethanol industry then cycled into an 18-month stretch of record margins from mid-2013 through late 2014 which explains why there were only five ethanol asset transactions completed in 2014.

These high margins provided a window of opportunity to reschedule existing and establish new debt structures with three high-profile debt facilities secured by producers in 2014. They include a $66 million senior credit agreement completed by Southwest Iowa Renewable Energy, a $225 million senior secured credit facility completed by Green Plains Renewable Energy, and a $40 million loan and security agreement secured by Aventine Renewable Energy before the company moved ahead with its merger with Pacific Ethanol. With margin pressures in 2015, 10 biofuel transactions, worth an estimated $800 million in value, were closed involving 13 plants.

Over the last few years, it has not been easy for ethanol producers. The government reduced credit lines provided by the Brazilian Development Bank. Droughts hit harvests in the Center-South region, where roughly 90% of sugarcane is grown. Debt-burdened companies, as many had taken out loans during former President Lula da Silva’s desire to make Brazil the “green Saudi Arabia.”

Falling global sugar prices hurt an industry reeling from the 2008 financial crisis. Government policies also undermined the ethanol sector. In its bid to control inflation, the government capped gas prices and removed the infrastructure tax on gasoline, making hydrous ethanol uncompetitive at the pump. Consumers quickly switched fuels, leading to a 10% decline in 2012. As a result, many producers invested in anhydrous ethanol or switched back to sugar. Forty ethanol plants went bankrupt.

However, the debt fallout remains and in June 2015 Petrobras announced their intention to sell off nine of their sugar and ethanol production plants. On Aug. 26, 2015, leading turnkey sugar and ethanol crushing plant supplier Dedini filed for a court-supervised debt restructuring. In September 2015 India’s Shree Renuka filed for creditor protection in a Brazilian court.

Today, with the production of 6 billion liters (1,585 MMGY – million gallons per year) of agricultural ethanol within the EU for a domestic market of around 7.9 billion liters (2,087 MMGY), the EU is a net importer of ethanol.

The EU ethanol industry is highly protected as the EU imposes a tariff of €0.19 per liter ($0.72 per gallon) on undenatured ethanol and an import duty for denaturated ethanol of €0.10 per liter ($0.38 per gallon). With the Transatlantic Trade and Investment Partnership (TTIP) trade agreement between the European Union and the United States, such tariffs may well be reviewed. However, with a risk of low-cost ethanol dumping, which was the reason tariffs were initiated in the first place, it may well be that the EU lobby groups will demand implementation of non-tariff barriers such as sustainability criteria.

Between 2014 and 2024, ethanol production from cereals is expected to rise from 2.2 million tonnes oil equivalent to 2.7 million tonnes oil equivalent which would cover around 50% of ethanol use in the EU. Nevertheless, this is not expected to account for more than 5% of cereal production and therefore would still have limited impact on agricultural markets within the EU.

Second generation cellulosic ethanol in the US was knocked back by the Obama administration on Nov. 30, 2015, with the news that there would be no aggressive set cellulosic targets or increase in overall ethanol numbers — leaving cellulosic projects in the unenviable position of competing for market share with first-generation ethanol.

While the US EPA’s 230 million gallon target for cellulosic biofuels for 2016 is almost double the 123 million target for 2015, this is partially being met by biogas producers. As of September 2015, biogas producers had ratcheted up production sharply and had reached a 160 million gallon annual rate, leaving not much headroom for liquid cellulosic biofuels.

This should result in changes in the use of feedstock for ethanol production, moving away in the medium term from the use of cereal food crops.

No, not by a long shot. The US ethanol industry is highly fragmented. There is ongoing consolidation, but it is far from over. The top six ethanol producers, those with more than 500 MMGY of production capacity, make up 45% of industry-wide capacity. The remaining 55% is comprised of 140 plants, divided among more than 50 companies. This includes a large number of farmer co-ops, most of whom own only a single plant. Needless to say, this landscape creates room for large multi-plant operators to improve efficiency across areas of energy, by centralizing marketing and logistics and increasing the margin crush by balancing low margin ethanol with higher value-added biochemicals compatible with ethanol production.

Today, Cellulac announces that it has signed Heads of Terms to enter into a commercial technology agreement with Integumen (LSE: SKIN). In addition, Integumen has conditionally agreed to acquire 9.35% of the issued shares of Cellulac. Gerard Brandon and Camillus...

What are you doing about ocean pollution?

To many people watching Sky News and their #OceanFree Campaign, you would think that removing plastic from the oceans will be enough to resolve the problem. Sadly, this is not the case.   The oceans ability to provide food from fisheries and aquaculture is...

Food and Fuel for the 21st Century   Microalgae have come to the attention of the industrial and academic community over recent years because of their ability to harvest the energy of the sun and provide valuable molecules that offer great potential to provide...

Cellulac merger proposal to Metabolix worth $40m in assets and offtake agreement of $38m rejected in favor of closing biopolymer business and spending $35m over 7 years on crop science project with no revenue.   DEAR METABOLIX SHAREHOLDERS   London, UK. 25th...

Hybrid Solutions   There is no need to reinvent a billion dollar wheel of bio-industrial experimental development. True value can be extracted and integrated as hybrid synergistic solutions from the best-in-class of what already exists.   Over the last 10...

Have we Reached Peak Biofuel?

Is there really an energy security risk?   Former NATO Secretary General Anders Fogh Rasmussen is calling on Europe to increase the production of biofuels from an energy security perspective because of geopolitical risks. This is a tough ask if such increase in...

Ethanol Industry is not too big to Fail

Phonetically speaking we know the two things that are guaranteed are death and taxes. However debt can be the precursor to death for not just companies, but industries. The ethanol industry, reading through the last 2 years of SEC filings by ADM, indicate that...

The ethanol industry has only been around for the last few of decades, though in its present state it takes centuries of fermentation knowledge to achieve the same output of ethyl alcohol (ethanol).Today, there are by-products or side-streams, such as distilled...

The abolition of sugar quotas in 2017 will have such a profound effect on EU sugar producers, used to super profits under the EU supported Common Agricultural Policy (CAP), that many smaller producers will be subject to consolidation or have to cease...

In a recent major MIT Study (Covert, Thomas, Michael Greenstone, and Christopher R. Knittel. 2016. "Will We Ever Stop Using Fossil Fuels?" Journal of Economic Perspectives, 30(1): 117-38. ) it was shown that approximately 65 percent of global greenhouse gas...

The butterfly effect is a concept that small causes can have large effects. Initially, it was used with weather prediction but later the term became a metaphor used in and out of science. Now it can easily be related to a single decision made by a Saudi Oil...

by cellulac | May 18, 2015 | About Cellulac, Algae, News, Science Breakthrough, Technology

by cellulac | May 19, 2014 | News, News and Events, Science Breakthrough, Technology

Cambridge, UK. 19 May 2014: Cellulac, the industrial biochemicals company is delighted to announce the world’s first ever industrial level continuous production of lactic acid from deproteinized lactose whey. Our 10 day production run concluded this week and...